"And they'll walk out to the bleachers; sit in shirtsleeves on a perfect afternoon. They'll find they have reserved seats somewhere along one of the baselines, where they sat when they were children and cheered their heroes. And they'll watch the game and it'll be as if they dipped themselves in magic waters. The memories will be so thick they'll have to brush them away from their faces." -- Terence Mann

There was a pause, a moment of thought, and then I went for it. With the moonlight as my guide on that pitch black Iowa night, I sprinted with the exuberance of a 10-year old on Opening Day across the small stream of water. I galloped onto the cool damp grass on that putrid hot night, forgetting the anxiety that came with trespassing on private property well past midnight. The magic in the moonlight was palpable; I would not have been surprised had Joe Jackson himself emerged from the darkness of the cornfield.

My brother Jeremy and I were giddy; the quietness of the night, the breeze on our faces, and the smell of the sweet corn in the outfield transported us to our youth. There is something about that place that you can feel in your gut. It turns adults into little boys with over-sized baseball caps full of dreams of making it to the Bigs someday when they grow up. With clouds rushing past the nearly full moon that night, Jeremy and I patrolled the outfield grass. We walked into the corn, disappearing into the darkness, half expecting to magically land in some sort of baseball heaven. We didn't need to be magically transported; we were already there.

Walking onto that field had been a dream of mine since I first watched Field of Dreams so many years ago on the eve of yet another Opening Day. Year after year, our family would gather in the living room with popcorn and put in the movie to get us in the mood for the start of the season -- the official start of summer -- the next afternoon. Being out there on that field in the darkness of night with only the sound of rustling corn stalks and the occasional passing car, it was apparent to me that the magic was certainly real.

After we had our share on the field that night, we drove back to the hotel a few miles away and hurried to sleep so that we could return in the morning. After breakfast, we went and bought a baseball glove and drove the beautiful serpentine roads of rural Iowa until we found the long gravel driveway of the farmhouse. To see the field in daylight was just as spectacular as the night before. I could visualize the whole movie -- Joe Jackson cracking fly balls to the cornfield in left, Archie winking, Terence Mann on the bleachers. 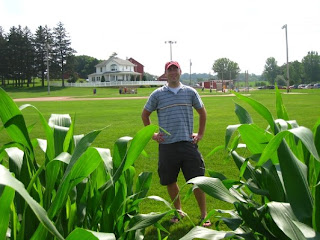 Jeremy and I played catch where Ray tossed with his dad. We swatted homeruns (from second base!) to hear the ball tear away at corn leaves on chest-high stalks. I played third base while a young boy took batting practice from his dad. I smacked a deep drive (this time from home plate!) off a perfect pitch from another boy and I ran all 360 feet around the base paths, sliding into home through a pile of red clay gravel. We walked the field more than once and talked to other visitors. One man, probably in his 70s, also strolled slowly in the outfield with his hands clasped behind his back. I asked him if he'd been here before. He had. Every single year since the field opened up to visitors, he made the drive from Indiana to soak in the magic.

But why? Why did he drive every year from Indiana to some empty baseball field in the middle of rural Iowa? Why did Jeremy and I make sure to visit the field? Why had it been a dream of mine to do that for so many years?

Growing up in rural Ohio, basketball was my favorite sport to play and football was my favorite to watch. However, as I have gotten older, baseball has become my favorite sport over the others. By far. Baseball is a special sport. It is timeless. Unlike any other sport, baseball immediately transports you to memories as a kid. I still fondly remember October of 1990 when my dad woke up my brothers and me to catch the end of the Cincinnati Reds' sweep of the Oakland Athletics. We had actually been listening to Marty Brennaman and Joe Nuxhall on a little box radio in our bedroom. But sitting with our legs crossed in the living room with my dad as Randy Myers jogged onto the field to close the ninth inning was special. Baseball has a connection beyond teams and players. It serves as a bond between fathers and children, brothers, and friends.

Now that I have three children of my own, baseball serves as a constant in our lives. Whether we are watching the Reds on a warm summer night, or playing ball in the backyard, baseball is bringing joy and laughter to our lives. My daughter Sierra, now four, loves to tell me the score of the game. "Daddy, I have bad news," she'll say with a frown. "The Reds have only three runs and the blue team has five runs." But when the Reds take a lead, she sprints over to me with the thrilling news. My son Aidan, now two, knows the lyrics to Take Me Out to the Ball Game. He always requests his baseball shirts. He loves the Cincinnati Reds and Jay Bruce. I took him to a Reds game for his second birthday and we sat in the right field seats. He yelled "Bruuuuuuce!" the entire game. And little Natalie, just seven months, is getting started. She wears her little Reds onesies for big games.

These are the moments I will undoubtedly be whisked back to some years from now when the three of them have left our house. The sound of their laughter, the crack of the bat, the happiness of Chrissy's cheering as Sierra races around makeshift bases after hitting a rocket past daddy. How I will long to hear Aidan's grand finale of "the old ball game!" I'll dream of sitting in the bright red seats of Great American Ball Park with my amazing children, eating hot dogs, and cheering on our team. What baseball has already brought to our lives is immeasurable. Baseball is beyond happiness.

And that is why a lonely old man strolls around an empty diamond in rural Iowa every summer with visions of his father or brothers or friends playing baseball on an emerald swath of grass so many years ago.