LeCure, Twitter, and the Meaning of Life
By Aaron M. Smith

"It's what you bring to the table, not what you wear to it." -- Sam LeCure

Sam LeCure is not Cy Young. He may never win one either. But what he represents is what baseball is all about -- the journey, the struggles, the joy in success, the frustration in coming up short. He has the tools to last longer than a cup of coffee in the Bigs and the proper perspective to be just fine if he doesn't.

I was at LeCure's Major League debut last year when the Reds throttled Houston at Great American Ball Park in Cincinnati. All he was to me at that time was simply a prospect with an encouraging first outing. But in the year since, he's become a lot more.

I began following him on the social media site not long after that game and was immediately immersed in the world of an up-and-coming baseball player. Reading his tweets, one gets a glimpse at the life of someone trying to live out a dream. One sees what life is like in the minor leagues and how excited a guy can be when he takes the mound in a Big League stadium. More importantly, one sees that baseball does not define a player. There is so much more to LeCure. He's an uncle who loves that role. He's a music lover -- it often serves as "therapy" for LeCure. He's a dreamer, a thinker, a philosopher. He's more than just some guy who can help my team win.

LeCure, a 6-foot-1, 205 pounder with a wild-west mustache and a strong right arm, hails from Jefferson City, MO.  He was drafted by Philadelphia out of high school in the 2002 amateur draft, but did not sign. Instead he played college ball for Texas before getting drafted and signed by the Reds in the 2005 draft. LeCure was called up to Cincinnati last May and made his major league debut in a start for the Reds on May 28, 2010 against the Houston Astros. LeCure pitched six innings, gave up two runs and six hits with four walks while striking out five batters. He was also the beneficiary of the Reds' offense producing fifteen runs on nineteen hits. Since then, he has bounced up and down between the Reds and their AAA affiliate Louisville. He currently is the long-relief man in Dusty Baker's bull pen.

Growing up, I always got the image of baseball players driving convertibles and living in mansions. As I've become an adult, that couldn't be further from reality. Sure there are some -- the superstars -- who live that lifestyle. But the majority of baseball players do not -- and these are the guys that are far more interesting to me. I love to hear about the struggles of fighting through the minor leagues to get to the show.
"I don't know what to say folks," LeCure tweeted earlier this season. "I desperately want to pitch and I feel like I'm wasting space as I'm sure you all do. I'm ready if they call." 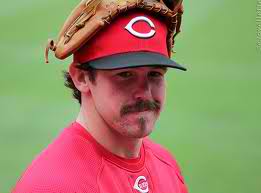 I crave stories of real life, real guys making it. That is Sam LeCure.


"I'll say this, my first trip to Wrigley was a memorable one," LeCure tweeted after pitching well in Chicago. "So happy to help the team win, and what a cool ballpark. Thanks, #beeasy."
LeCure gets it. He's not spoiled by his opportunity with the Reds. He does not have some skewed view of the world because he's a major league baseball player. He understands, and more importantly, appreciates the opportunities that have come his way. And he lives out this life, this journey of his on Twitter.


He engages his fans in philosophical discussions: "Sports, politics, humanity, what's going on in the world that is in the forefront of your mind?"
He gives his fans a glimpse of what it's like to live the life of a traveling ball player: "Nothing quite like waking up and having no idea where you are. Lovely #roadwarrior"
And he embraces his family life: "Just talked to my Pop for a while, I love that guy. He is who he is and hes cool with that, and so am I. Can't wait to give him a big hug."
LeCure takes us on road trips with him with his regular "top step pictures." He stands on the top steps of the dugout in each stadium he visits and takes a picture. He then posts it to Twitter. It shows his appreciation of where he is and allows his fans to see the awesome view of sitting in a major league dugout.
He also provides his fans a healthy dose of perspective and thought in his "five things." Every once in a while, he posts five things that he is thankful for or items that he is thinking about. Rarely, if ever, is it baseball related. He does his readers a lot of good by showing that there is more to life than how well or poorly the Reds may be playing. Life goes beyond baseball.

It has been a treat to watch LeCure grow as a pitcher for the Reds and to "get to know" him through Twitter. When Dusty calls to the pen to bring him in, I feel like someone I know is getting called to the mound. I root for his success, not only as a Reds fan, but because I genuinely want to see LeCure succeed. He's the kind of guy I root for in sports.

LeCure's quest for success on the field and his craving of wisdom and knowledge off of it is inspiring. I will always be a fan of his.

And it will have nothing to do with is ERA.