An Open Letter to the Cleveland Browns

An Open Letter to the Cleveland Browns
By Aaron M. Smith

I am now 32 years old and have just finished watching one of the most lackluster performances by the Browns since they returned to the field in 1999 as an expansion team (and that is saying something). This team may play in Cleveland and don the brown and orange of the original franchise, but they have lacked the soul of the Cleveland Browns and the heart of Paul Brown and Jim Brown since they returned to the league.

For more than a decade, I have watched the Browns field weak rosters with guys who were more interested in payday than game day. The most recent player is Peyton Hillis. Last season he arrived in Cleveland via trade with a chip on his shoulder the size of Shaker Heights. He worked his butt off, plowing over defenders, and earning respect as a blue-collar bruiser that so represented the heart and soul of Cleveland. But that one year got into his head. He know thinks he is bigger than game. He showed up in less than stellar shape. He has not taken care of his injuries. He left the team to get married in mid-week. He let his agent talk him into sitting out with strep throat in order to make a statement about getting a monster contract extension. Meanwhile Tony Romo -- you can say what you want about him -- was suiting up and playing for the Cowboys with two cracked ribs and a punctured lung. That's heart. What Hillis has shown is selfishness and greed.

Since 1999 the Browns have had guys named Palmer and Butch and Romeo and Man-Genius and Shurmer running the team. Every other year the Browns get a new quarterback and then a new offensive system and then a new head coach and then another system and so on and so forth. It's not hard to see why this team has been the most offensively challenged team in the last decade. The Browns have had new general managers and new philosophies and nothing has worked. Nothing. Some 12 seasons after the Browns came back, I still see confusion from the players, blank looks from head coaches, and absentee owners and general managers. Nothing has changed. This endless cycle of ineptitude is embarrassing.

The scouting program in this franchise has got to be one of the worst in the league. How can the Browns have top-10 picks year in and year out and still put one of the weakest rosters on the field? This current team has so little talent, I doubt it could compete with the best in college football. Seriously. Josh Cribbs was a good find and is THE soul of this team. Too bad there is only a handful of players like him on the entire Browns roster. I just don't understand how after a decade of getting the top choice of the best players in college football, the Browns have an obvious lack of talent compared to other NFL teams. Detroit has finally figured out how to draft well. The Bengals seem to know that they're doing these days. These were two inept franchises that figured it out. The Browns are still wallowing in their own ineptitude.

Yet with all of this dysfunction, the Cleveland Browns have no problem charging insane money for PSLs and season tickets. Single game tickets are ridiculously pricey as well. You can't take a family to see the team play -- not that anyone would want to these days -- because it would cost a month's salary for most just to get in the gates. Not to mention, the seats would have to be a mile away because the corporations and businesses and millionaires get the good seats.

I grew up the biggest of Cleveland Browns fans. I was inspired by Bernie Kosar and Hanford Dixon and Big Daddy Hairston. I loved Clay Matthews and Frank Minnifield and Kevin Mack. But the players that put on the uniform these days don't even come close to the guys that once represented this once-proud franchise. Not being a good player is one thing, but the lack of passion that I've witnessed, the lack of intelligence on the field for the last decade is inexcusable. Football is their chosen profession, yet being stuck in this quagmire of mediocrity seems to be just fine to those in charge of this organization. In any other profession, this level of failure would not be tolerated. 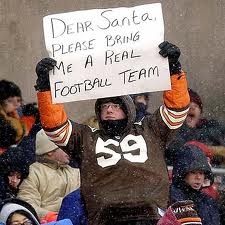 Have some pride in what you do. Understand that you represent not just that franchise that once was, but that you represent a city that has defended your ineptitude the entire way. It's time to start paying back the fans for years of sold out stadiums and around-the-world fan clubs. It's time to give the fans something to cheer about again. Sooner or later, the Browns won't just  have lost games to worry about. They'll have to worry about lost fans. And I would think that would mean something to those in charge.

There is no ultimatum here. I'm not threatening never to go to a game again. I'm not saying I'm not a Browns fan, because in all seriously, I don't think that would really mean anything to the franchise. Just know that one of your biggest fans can't even watch you play on Sundays anymore. I would hope that would mean something, anything to such a fledgeling franchise.