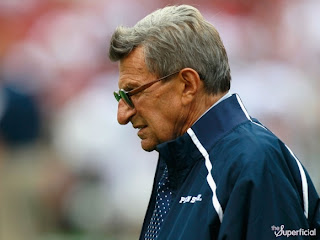 This past Saturday, I read the grand jury report about the Penn State mess involving Jerry Sandusky et. al. I haven't been the same since and I can't even imagine how the last decade has gone for the young boys most directly affected. It has sickened me and has made me question the current state of our society. It has made me loathe the college football machine, the greed, the power that has seemingly -- and unfortunately -- taken a seat at the top of our collective priorities. There is too much to talk about with this horrific and outrageous story, but I wanted to bring up a couple of questions that I can't seemingly wrap my brain around.

On Graduate Assistant Mike McQueary
Mike McQueary then a 28-year old MAN, walked into the locker room and heard what he said sounded like sexual actions coming from the shower. He walked into the shower and saw Jerry Sundusky raping a defenseless boy who, McQueary said, looked to be about 10 years old. McQueary walked out of the locker room distraught and called his father. His father and he then went to Joe Paterno's house the following morning to talk about what he saw.

Let me stop right there for a moment. McQueary witnessed a vile criminal act and didn't think to call the police? How is that possible? Secondly, McQueary, a big man and former football player, left the 10-year old boy to fend for himself. He left the locker room without trying to save the child or find out who he was and how he could help. That is the most dispicable thing in this. He walked out on this kid without helping him. He let this child alone with Sandusky after witnessing Sandusky raping him. There is absolutely no excuse for that. None! This is a quote from McQueary's father:

"He's a good kid and tough kid. He did what he was supposed to do, and all of this has been very hard on him. Everything from this and about this (case) has been difficult for him, but he's a strong person and will be OK."


Wrong. On so many levels. First, he wasn't a kid. He was a 28-year old man. Let's be clear on that. He was a 28-year old man who knows the difference between right or wrong. Secondly, he did not do what he was supposed to do. He saw a horrendous crime being committed against a young boy and did nothing to stop it nor did he call the police to report what he saw. He did NOT do what he should have done. And to the father, neither did you. How can you hear that account from your son and not call the authorities? Not only did your son not do what was right, neither did you.

Then there are reports that Sandusky has been a part of the football program for the last decade, often working with players and running a youth football program. I simply do not understand how McQueary could see Sandusky commit such a vile act and then see him working with young boys and not do anything about it. It says a lot about what kind of person McQueary is. And judging by the act of his father, it's easy to see where he got it.

On Joe Paterno
Joe Paterno is the Godfather of college football. At Penn State, he is simply a god. He ran the program and for all intents and purposes, the entire university. He was the equivalent of a CEO for a Fortune 500 company (Penn State makes a $50 million profit each football season). Someone comes to him and tells him that his assistant coach was doing something "of a sexual nature" to a young child. Whether he understood that it was a full-on rape or not, he has an obligation to get the police involved immediately. Take the football out of this. A CEO knows an employee of his has sexually assaulted a child in his office building and then does nothing is usually arrested and charged with some sort of obstruction of justice. That hasn't happened. JoePa is a legend. He's a football coach. He didn't get the police involved at all. And there is no defense for that. All Paterno had to do was make a phone call after hearing about Victim 2. And because he didn't, there are now 20 victims with horrific tales about Sandusky.

I'm tired of hearing about Paterno the Legend. His football accomplishments pale in comparison to the unbelievable lack of humanity in this situation. How you could know what happened and let that man on your campus and in your locker room and a part of your university is beyond me. How you could know Sandusky was raping a child and then see him running his youth camp is disgusting. Paterno, you had an obligation to this child, and you failed miserably. I feel no sympathy for you -- only for the 18 (at least) boys that became victims after you failed to stop Sandusky in his tracks.

On the state of our society 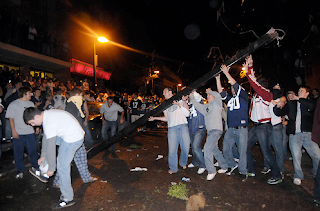 I've heard so many times in the past four days, "As a father of two, I'm outraged ..." or "Being a parent, this sickens me."

Why do you only understand how horrendous this crime was if you have children of your own? People are saying that the media is making Joe Paterno a scapegoat. Seriously? Read the grand jury report and I'm sure you'll have another perspective on the matter.

Where was this outrage for the victims?

On college football
College football has gotten too big. There is so much power and money and greed and the people in charge have lost all perspective. It has become "Protect the Program" first and everything else a distance second. Unfortunately, because of this greed, this dedication to the program, sexually abused and assaulted children finished a distant second. Let me say that again. It was the Penn State football program first ... then the kids. Sickening.

But we as a society also failed miserably here. What kind of world do we live in where something like this could happen? People are rioting in favor of a coach instead of picketing and demanding justice for children. This is a horrific failure on our part.

As a human being, I'm appalled by all of this. By Sandusky. By Paterno. By McQueary. By the school president. By the rioters on campus. No one involved has any dignity left. And no on-field accomplishments or budget reports should make anyone think otherwise.
Posted by A.M. Smith at 9:17 AM