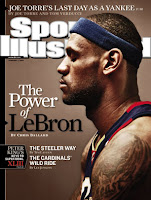 So basically, what I am saying is, spare me the loyalty speech. These athletes and coaches have every right to leave his current situation for better opportunities. I don't need to hear that LeBron owes Cleveland or that Albert should have stayed in St. Louis or that Brian Kelly didn't earn the right to leave for greener pastures. So keep that to yourself. Unless of course, you pass up every promotion or better job opportunity that comes your way because you want to be loyal to Sid, the guy who gave you your first job mowing his grass and cleaning out his garage. When that happens, you can complain all you want.
Posted by A.M. Smith at 1:16 PM